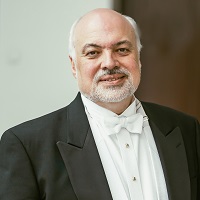 Four-time Grammy-nominated conductor Constantine Orbelian has been called “the singer’s dream collaborator” by Opera News, which hailed him for conducting vocal repertoire “with the sensitivity of a lieder pianist.” He has toured and recorded with some of the world’s greatest singers, such as American stars Renée Fleming, Sondra Radvanovsky and Lawrence Brownlee, and with the great Dmitri Hvorostovsky and other renowned Russian singers in European, North American, Russian and Asian music centers.

Maestro Orbelian’s accomplishments include being Music Director of the Moscow Chamber Orchestra and the Philharmonia of Russia, founder of the annual Palaces of St. Petersburg International Music Festival, Chief Conductor of the Kaunas City Symphony Orchestra in Lithuania, and Artistic Director of the State Academic Opera and Ballet Theater in Yerevan, Armenia. Among his concert and televised appearances are collaborations with Hvorostovsky, Renée Fleming, Anna Netrebko, Elīna Garanča and Van Cliburn, including the legendary pianist’s farewell performance.

Born in San Francisco to Russian and Armenian émigrés parents, Maestro Orbelian made his performing debut as a piano prodigy with the San Francisco Symphony at the age of 11. After graduating from Juilliard in New York, he embarked on a career as a piano virtuoso that included appearances with major symphony orchestras throughout the U.S., U.K., Europe and Russia.

The first American to become music director of an ensemble in Russia, he was awarded the coveted title “Honored Artist of Russia” in 2004 in recognition of his efforts championing Russian-American cultural exchange. In 2012 the Russian Consulate in San Francisco awarded the maestro the Russian Order of Friendship Medal, joining such luminaries as Cliburn and Riccardo Muti in being so honored. In 2001 Maestro Orbelian was awarded the Ellis Island Medal of Honor, given to immigrants, or children of immigrants, who have made outstanding contributions to the United States.

Maestro Orbelian has recorded over 60 CDs for the DELOS Label and has additional DVDs and CDs which have been released on Decca, Deutsche Gramophone, Chandos, Philips and Warner labels.